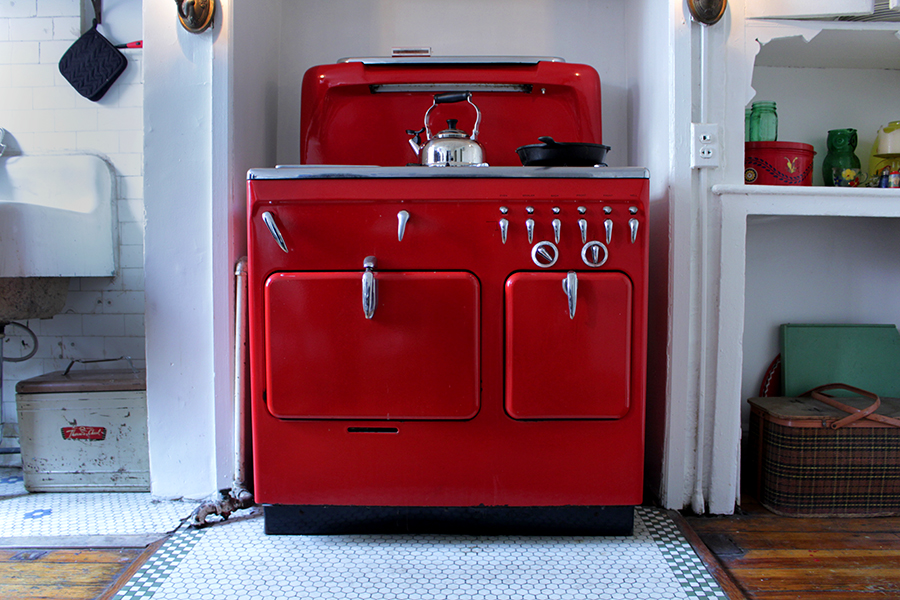 For our most exciting Dwellings excursion yet, we take you to Bedford-Stuyvesant in Brooklyn. We stepped off the subway, turned the corner onto Stuyvesant Avenue and, as strangers to this part of BK, were surprised to find rows of beautiful brownstones! Our hosts explained to us that Bed-Stuy claims the highest concentration of pre-war brownstones in all of NYC. And the home of Byron and Bee definitely does this neighborhood justice.

Bed-Stuy is a historic Brooklyn neighborhood, and their house represents a unique history of its own. Built in 1891, it was first owned by a German family with the last name Fuehrer; they later changed their name to “something like Fulton” for obvious reasons. The second owners lived there from 1930-1997 at which point, the house was purchased by an artist and used primarily as a photography space. During Byron and Bee’s first viewing of the house, the place was overrun by half-naked male models and kittens; probably a selling point. 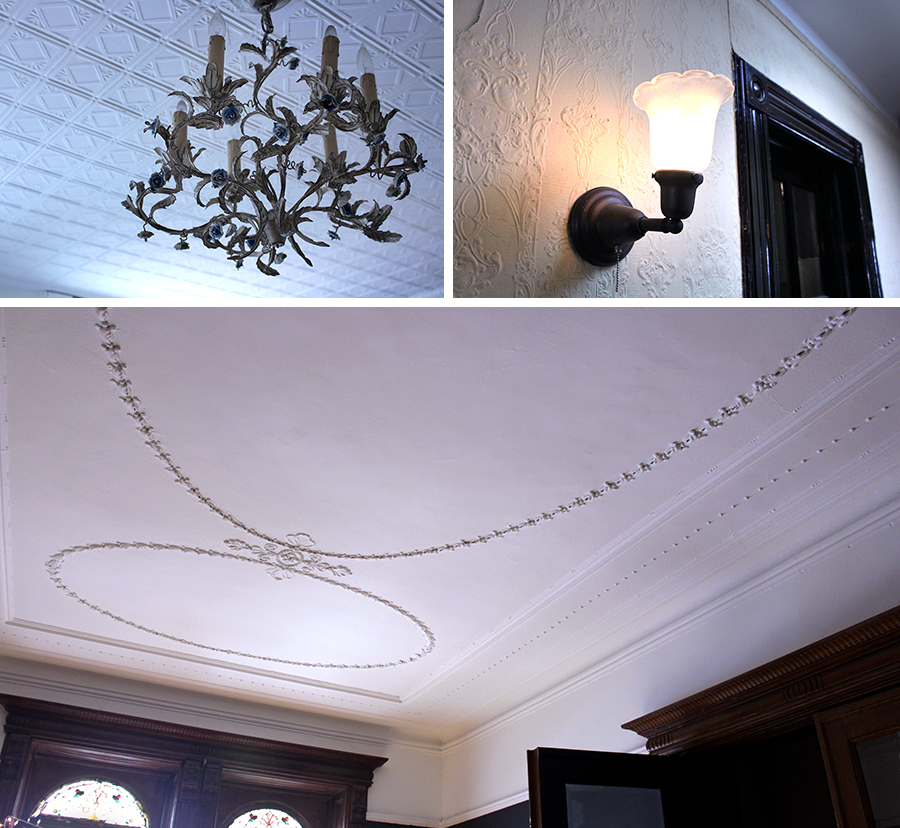 The house became theirs. Byron and Bee moved to Brooklyn, after spending 10 years in London where Bee worked as a writer and Byron as a research professor at the University College London. While they describe their London flat as much more modern, they wanted the items that would inhabit their new home to match the Victorian style of the space. There are original ornate details everywhere, including 5 fireplaces, original windows and accordion style shutters, narrow dark wood staircases, large door frames, beautiful floor-to-ceiling crown molding, hardwood flooring that is unique in each room and Lincrusta-covered walls—a beautiful textured paintable wall-covering that was very popular during the Victorian era.

Entering the four-floor brownstone is truly like stepping back in time. Byron and Bee, eager to maintain this time warp, are changing as little as possible of the home’s construction, while of course bringing things up to code, as demanded by the city.

The bust of John Abernathy Kingdom (right), Master of Grocers from 1889–1941. The Grocer’s Guild of the City of London was established in the 1300s for maintaining standards for the purity of spices and for setting certain weights and measures. Byron and Bee obtained this bust after the Grocer’s hall was almost completely destroyed by a fire. 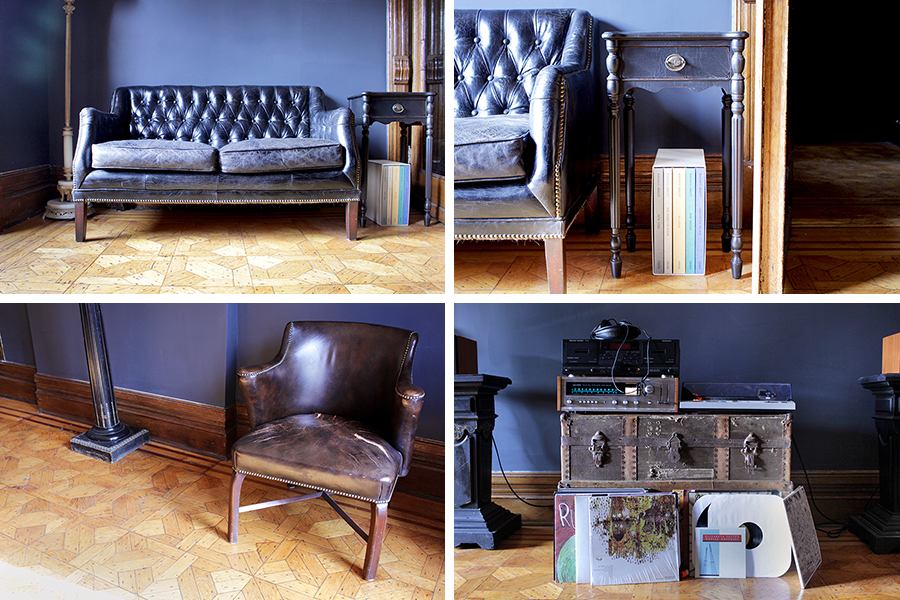 The living room. The trunk featured above is the trunk that Bee’s great grandmother used when illegally entering the country from Finland. As a result, the family does not know their true last name, but at least they have the trunk. 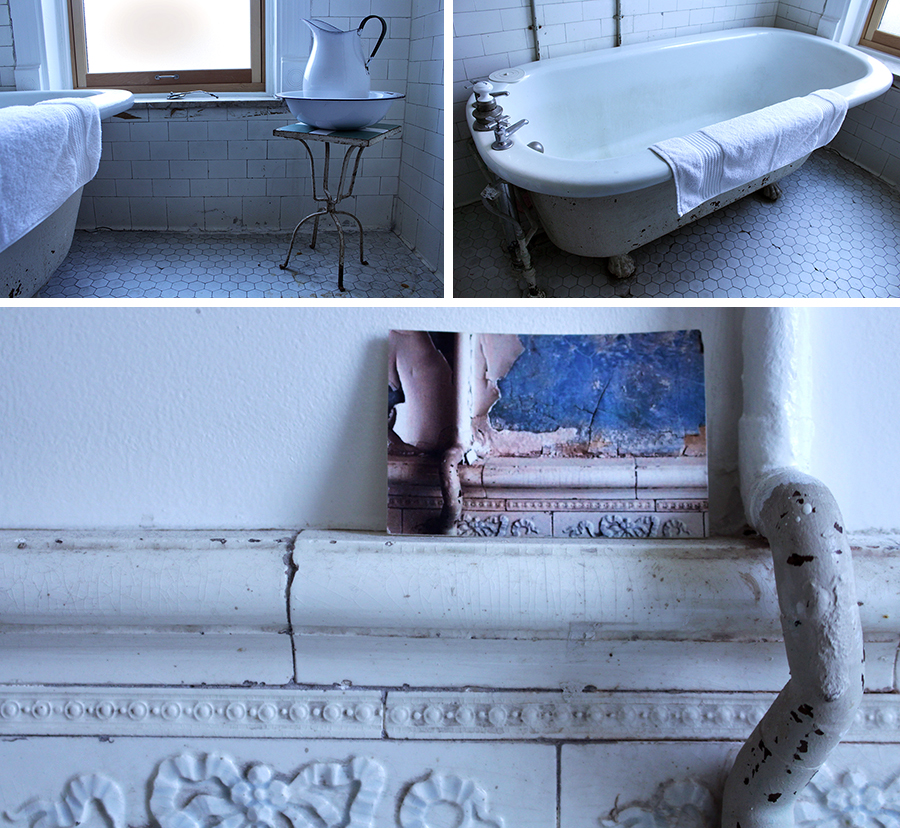 Every room has its own unique identity, but there are a few that really stand out. Walk into the main bathroom of the house, and instantly feel like an entire day could be spent there. With the soft blue light, giant claw foot tub, and darling wall tiles with pastel floral details, it is simply lovely. Although Byron and Bee would have loved to keep the original bright blue (and probably lead-filled) paint on the walls, a good deal of work had to be done to this room to prevent a variety of code violations. Despite the changes, it’s a truly romantic space. 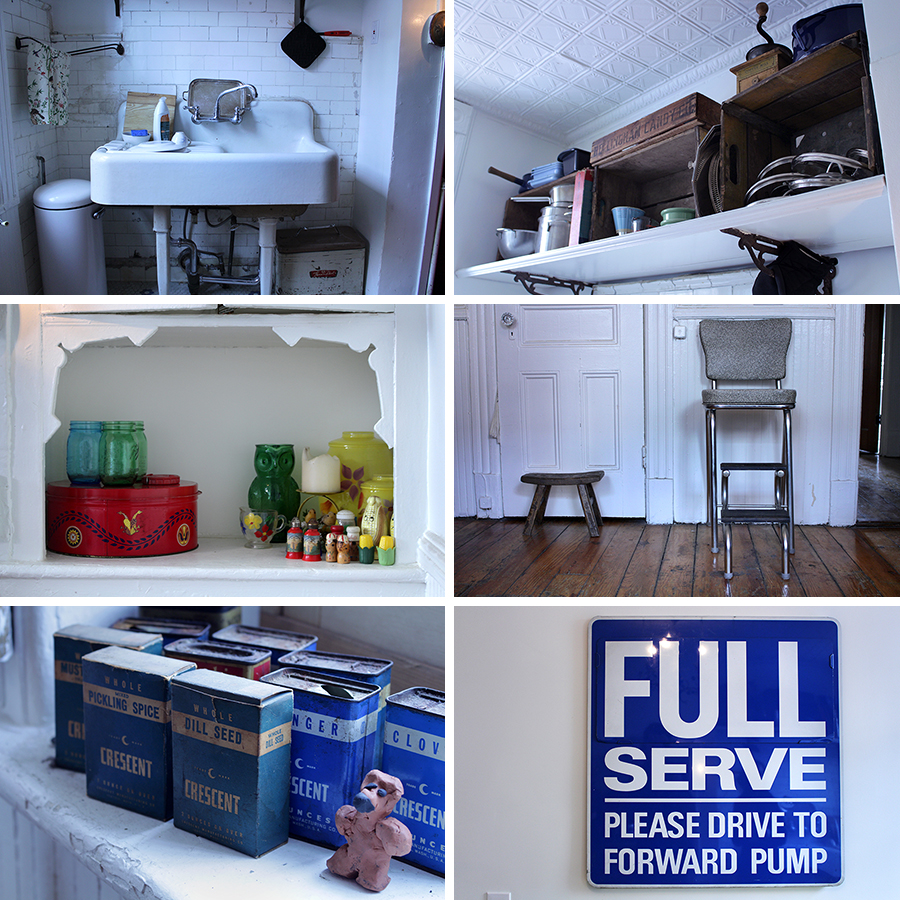 Head downstairs to the kitchen where large windows face out to the backyard; the previous owner planted a perennial garden, making the room well-lit and serene. A bright red 1950s Chambers stove, restored to good working order by “Carlita the Stove Lady,” grabs your immediate attention. The couple’s favorite Furnish Green piece, a Hoosier kitchen cupboard from the turn of the century, also resides here. Made of oak wood, it has plentiful cabinet space and a built-in flour sifter, complementing the space and its vintage kitchen companions.

Byron and Bee certainly are educated home-owners, with a great knowledge of their home, the neighborhood and its inhabitants. They also provided a wealth of interesting asides to keep us enthralled for the entirety of our visit. It’s an amazing space so take a look at what’s going on in the rest of the house! 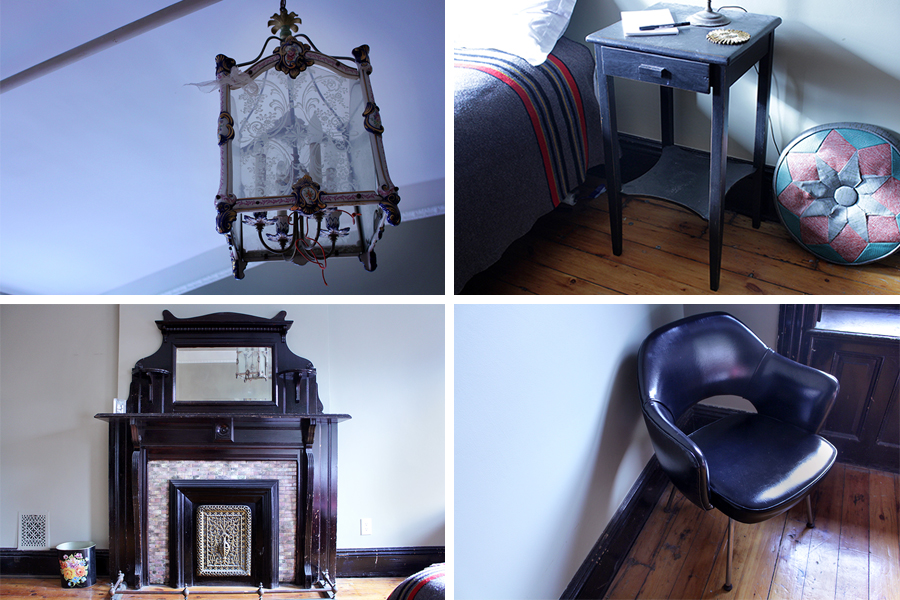 The master bedroom with FG chair and nightstand. 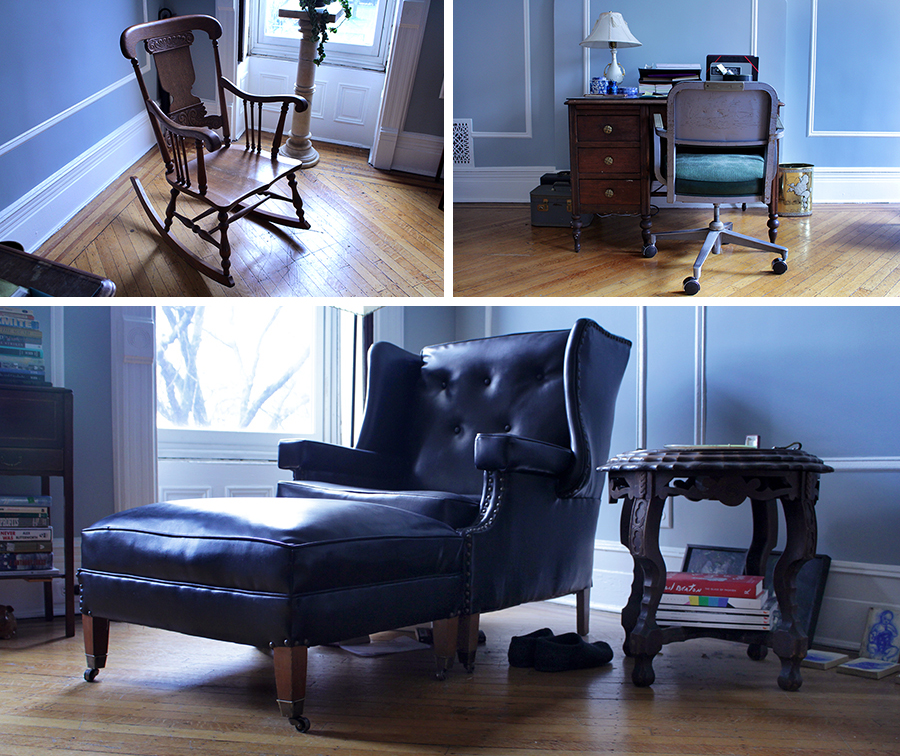 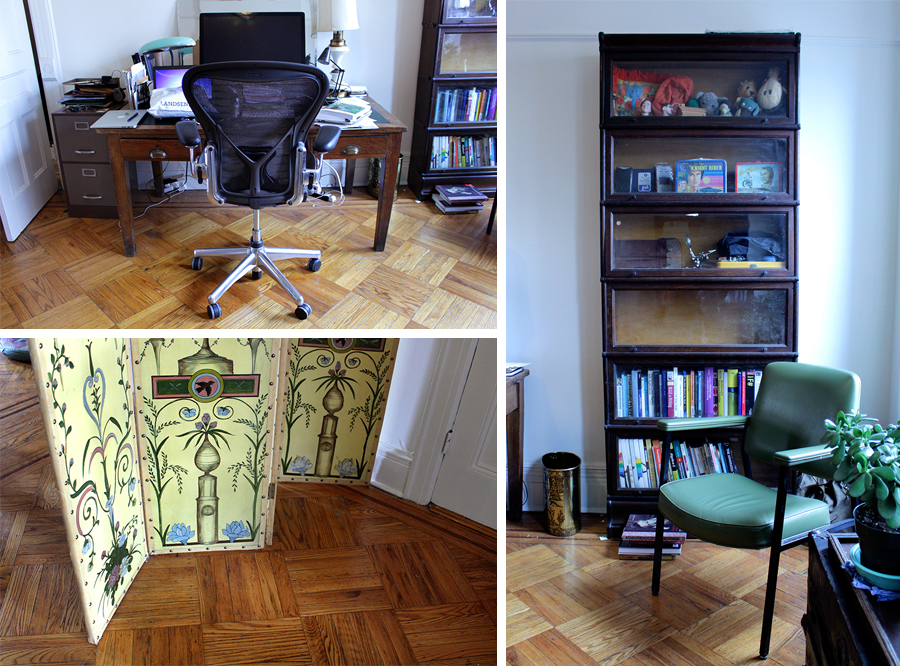 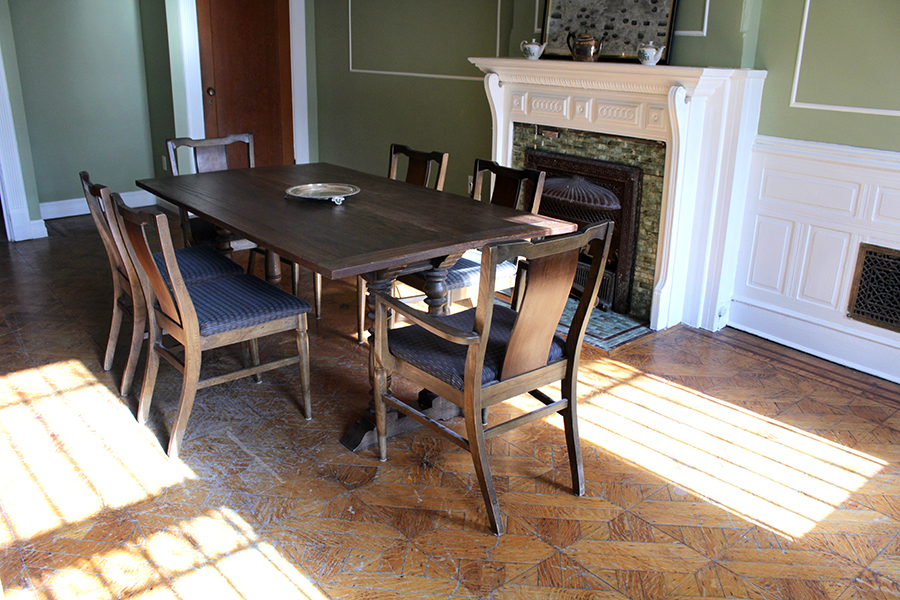 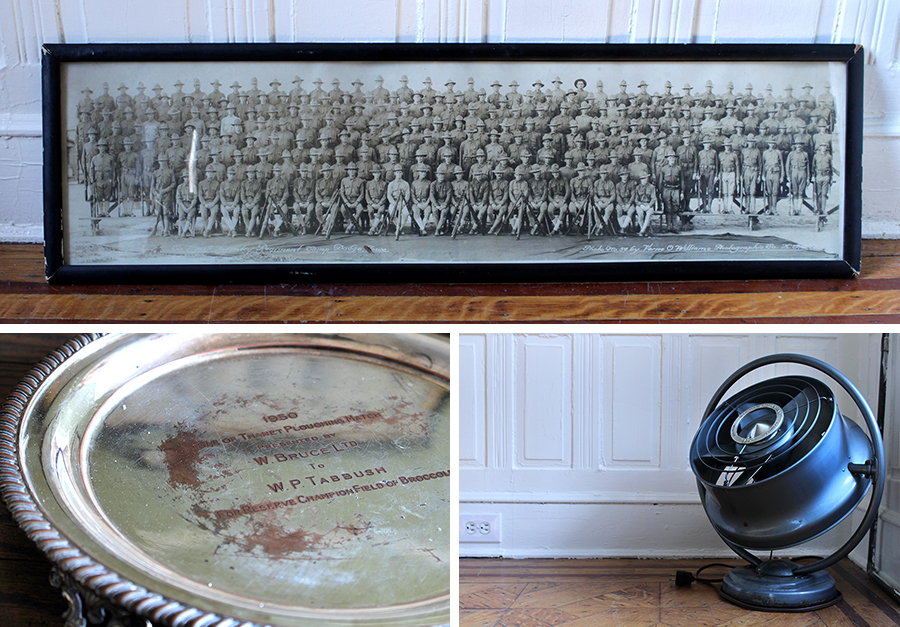 Dining room with FG dining chairs and industrial floor fan.
We hope you’ve enjoyed this installment of our Dwellings series! Stay tuned for future posts, and email us at furnishgreen@gmail.com for a chance to have your space featured!