Furnish Green is excited to attend and share the information about MoMA’s first major exhibition on the work of Le Corbusier (Charles-Édouard Jeanneret, 1887–1965), encompassing his work as an architect, interior designer, artist, city planner, writer, and photographer. He was a pioneer in studies of modern high design and was dedicated to providing better living conditions for the residents of crowded cities. Conceived by guest curator Jean-Louis Cohen, the exhibition reveals the ways in which Le Corbusier observed and imagined landscapes throughout his career, using all the artistic techniques at his disposal, from his early watercolors of Italy, Greece, and Turkey, to his sketches of India, and from the photographs of his formative journeys to the models of his large-scale projects. His paintings and drawings also incorporate many views of sites and cities.

Click here to see sample photos curated by Jean-Louis Cohen. The full edition is available in hardback and is highly recommended.

For those of you who aren’t familiar with his work, you will be interested to know to that Le Corbusier began experimenting with furniture design in 1928 after inviting the architect, Charlotte Perriand to join his studio. His cousin, Pierre Jeanneret, also collaborated on many of the designs. Before the arrival of Perriand, Le Corbusier relied on ready-made furniture to furnish his projects, such as the simple pieces manufactured by Thonet, the company that manufactured his designs in the 1930s.

The first results of the collaboration were three chrome-plated tubular steel chairs designed for two of his projects, The Maison la Roche in Paris and a pavilion for Barbara and Henry Church. The line of furniture was expanded for Le Corbusier’s 1929 Salon d’Automne installation, ‘Equipment for the Home’. These famous chairs included the LC-1, LC-2, LC-3, and LC-4 and projected a new rationalist aesthetic that came to epitomize the International Style. Shown in clockwise order below, these chairs were clear depictions of the way Le Corbusier felt about furniture. In 1923, he was quoted as saying “Chairs are architecture, sofas are bourgeois. “ In 1964, while Le Corbusier was still alive, Cassina S.p.A. of Milan acquired the exclusive worldwide rights to manufacture his furniture designs. Today, many copies exist, but Cassina is still the only manufacturer authorized by the Fondation Le Corbusier. 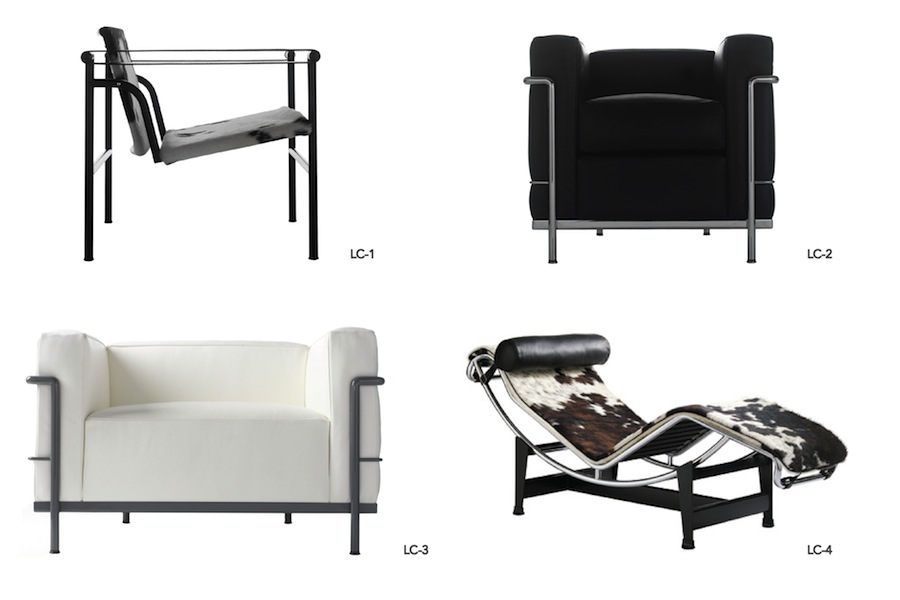 We hope to see you at the exhibit! Information & photos courtesy of MoMA, Wiki & Cassina.